MUOs control 54% of all franchised units

The steady expansion of multi-unit dominance had its start in the late 1980s, so it is relatively recent in the context of the franchise business model. As recently as 8 years ago, a majority of units were controlled by single-unit operators. The pace of change to multi-unit dominance has been consistent and predictable, with a current rate of change of about 1 percent each year.

There are two big drivers of this change. The first is that we raised a generation of franchisees with growth on their minds. They pushed through the older “buy a job” mentality with business plans aimed at multi-unit expansion from the start. The second driver is cooperative franchisors that went from being concerned by too much franchisee power to actively designing development programs around multi-unit models.

As with these five franchisees, industries with the highest concentration of multi-unit franchisees are mostly found in the food space. As the table shows, 82% of franchised QSR businesses are controlled by multi-unit franchisees, followed in the food space by sit-down restaurants at 72%, and baked goods at 57%. Also of note is the rise of some non-food industry classifications, such as beauty-related, clothing and accessories, automotive, business-related, and real estate.

There are some interesting geographic distinctions as well, creating a sort of North-South divide. Only four states have a majority of units in the hands of single-unit franchisees: New Jersey (55%), Delaware (56%), Vermont (57%), and Washington D.C. (59%). West Virginia, at 61%, has the highest concentration of units controlled by multi-unit franchisees. All other states with high concentrations of units in the hands of multi-unit franchisees are in the South and Midwest, and include Arkansas, Missouri, Ohio, and Oklahoma, each with 58% to 59%.

Here are some more statistics that shed light on the profile of multi-unit operators in 2019: 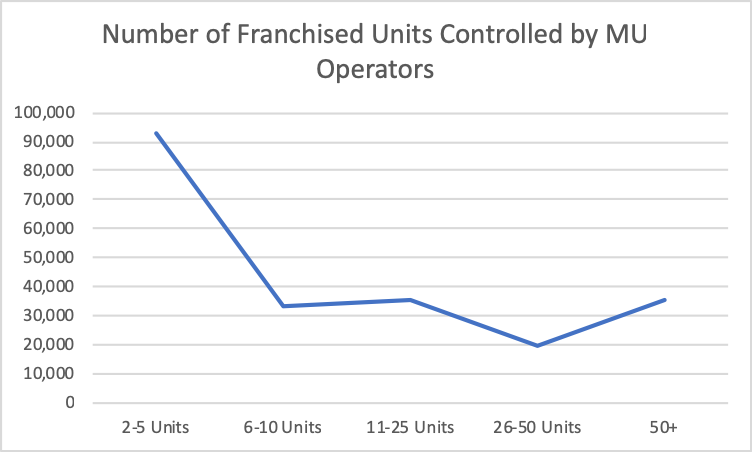 Across all units, the average multi-unit franchisee owns 5 franchised locations, up from about 4.8 in 2011. The rise in unit ownership among multi-unit operators has been a factor in the growing interest from private equity and other types of investor groups to invest in franchisees. This was led by consolidations among franchise operators, as these investors are increasingly targeting multiple acquisitions of the small to medium-sized franchisees and consolidating them under their stewardship. Consolidations have led to a faster uptick in the number of units held by larger operators as compared with their smaller counterparts.

With the growing investor interest, it’s a good time to be a multi-unit operator.

Darrell Johnson is CEO of FRANdata, an independent research company supplying information and analysis for the franchising sector since 1989. He can be reached at 703-740-4700 or djohnson@staging.frandata.com.

*This article originally appeared in the 2019 Multi-Unit Franchisee Buyer’s Guide. You can view the issue here.